Chicken with Apricots and Almonds (Tagine) 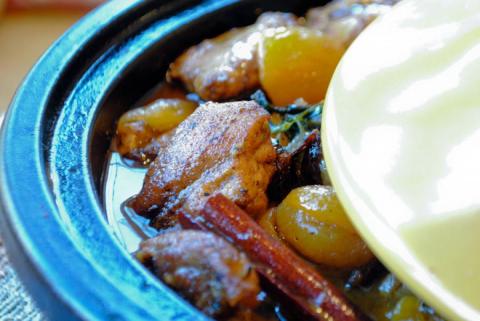 Good mis en place will make this an easy recipe to follow. You can use a dutch oven instead of Tagine.
I recommend removing the skin from the chicken and making sure to remove and clean any blood or gibblets as it will "brown speckle" the dish.
Also remove the parsley and cilantro after 10 minutes to prevent it from breaking appart and staining the dish green and wrap it in cheesecloth just in case.
Chicken will cook for 30 min with ingredients, you will add the honey mixture for the last 10 minutes.

Heat butter and 1 tablespoon oil in base of tagine, uncovered, over moderate heat until hot but not smoking. Cook almonds, stirring occasionally, until just golden, 1 to 2 minutes, remove. Add chicken, skin sides down, turning over once, 8 to 12 minutes. Transfer to a plate.

While chicken cooks, bring honey, remaining cup water, cinnamon stick, and apricots to a boil in a 1- to 2-quart heavy saucepan, then reduce heat and simmer, uncovered, until apricots are very tender (add more water if necessary). Once apricots are tender, simmer until liquid is reduced to a glaze, 10 to 15 minutes.

Ten minutes before chicken is done, add apricot mixture to tagine. Serve chicken sprinkled with almonds on top and decorate with additional parsley and the cinammon stick.

Image from
Adapted recipe from